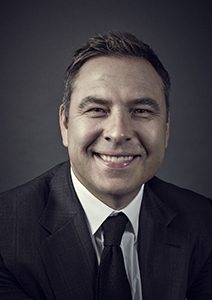 One of Britain’s best-loved comedians and authors, David Walliams OBE has won numerous publishing awards for his best-selling children’s books and has had his writing style compared to that of Roald Dahl. To date, his books have been translated into 53 languages and have sold over 37million copies worldwide, and he has been referred to as “the fastest growing children’s author in the UK.” Several of David’s books have been successfully adapted for television, including the International Emmy award-winning Ratburger, Gangsta Granny and Billionaire Boy, with more in development at King Bert.

David previously starred in Little Britain, which won numerous international awards including three BAFTAs. He also co-created and starred in Come Fly With Me and Big School, and has been a judge on Britain’s Got Talent since 2012.

As a trustee of Comic Relief, David has personally raised over £8.5 million for the charity. He has notably completed charitable challenges of swimming the English Channel and River Thames and was awarded an OBE for his services to charity and the Arts.